I'm wanting to articulate the majesty and mystery of the unseen network-connection between us and nature (as nature) and to reveal images that may not yet be in the collective unconscious - moving us through the abstract into the imaginable.​

Meakin was born in Staffordshire, England, and then spent his formative years growing up in the beautiful Georgian cities of Bath and Brighton. In 1986 he was offered a place on the Art Foundation at Brighton Polytechnic where he was encouraged to explore different forms of expression in painting, textiles, sculpture, and video. At that time the Brit Art movement was flowering in London but he was looking for a different kind of aesthetic that seemed unrepresented in the galleries. Eventually, it was an exhibition of aboriginal art that inspired him most.

Being unsure of his creative direction in 1990 he had found a place to study for a degree in 3D design at Bournemouth. It was here, whilst researching ideas for a project, he discovered a dusty old hard-back full of ancient ‘illuminated’ manuscripts from all over the world. This book contained the loose-leaf illustrations of geometric pattern construction methods for both Arabic and Celtic pattern. On finding something 'true' in the patterns, he began to imagine an abstract language that can be found in all cultures and his passion for geometry was born. Once graduated, he worked for Swatch briefly and then for an upmarket kitchen design company in Tunbridge Wells before relocating abroad where he helped to paint theatre backdrops in France, Ibiza, and then in Mexico before eventually returning to the UK via a 4-year stay in the Virgin Islands where he worked as a mural painter, graphic artist and windsurf instructor. In his private sketchbooks, he had started to explore Geometry as a universal language learning the techniques of Celtic and Persian pattern making and embracing the decorative arts from Gothic Europe and Tibet.

In 1996 he was offered a place to study Architecture & Interior Design at Brighton University. He gave himself time to continue research of subjects such as cosmology, ancient temple buildings, and the abstract ornament of antiquity. Following some years working in commercial architecture designing out-of-town shopping centres and then cruise ship interiors, he decided to move back to Brighton in 2002 to study for an MA in Fine Art. This allowed him time for a more in-depth compositional analysis of inspired works by his favourite artists  Kandinsky, Klee & Miro, and this initiated further conceptual alignments in the process of making art developed by Brice Marden, Hanne Darboven, and Joseph Albers.

Stephen Meakin is best known for his large, vibrant, often circular paintings that are underpinned by the meticulous draftsmanship of geometries. With a controlled but no less expressive artistic style, each canvas is painstakingly painted over hundreds of hours eventually revealing beautiful mandala-esque patterns that are simultaneously inspirational, yet contemplatively intriguing. On closer inspection, these paintings are much more content-rich than the mere surface ornament. Intricate geometries are woven together with botanical form, butterflies, bees, birds and mystical beasts flowing from his imagination. Each composition has its own numerical narrative embedded within its fine detail. Just as a pentagon (forget-me-knot has 5 petals), is different from a hexagon (honeycomb has 6 sides), each painting has its own structural laws and its own number, rhythm, cadence and tone. The essence of his work is to encourage a higher level of relating to the natural/physical world that surrounds us. 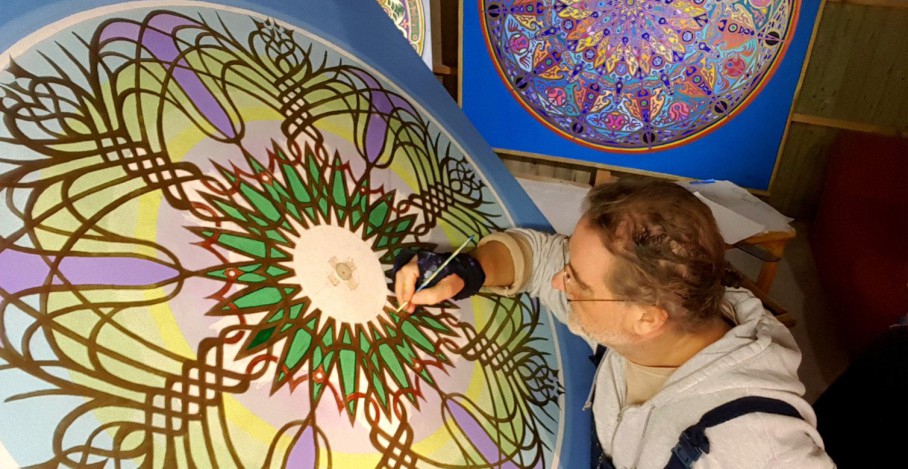 Recommend this page
The Mandala Company 2021. Contact: info@themandalacompany.com. All Images and Designs are Copyright ©Stephen Meakin All Rights Reserved, World Rights Reserved, Reproduction in whole or in part in any form or medium without express written permission is prohibited.