What is a mandala?

From an enlightened perspective mandala can be understood as a (condensed)

microcosm of the universe sometimes depicting a principal deity as a metaphysical concept.

The most common translation for mandala is 'circle' or more specifically 'sacred circle. The word mandala comes from Sanskrit which is an ancient Indic language from the Asain sub-continent. The Shruti Hindu scriptures and all the classical Indian epic poems were written in Sanskrit over 2500 years ago. In Hinduism and Buddhism mandala are created as spiritual and ritual symbols representing the Universe or a generic term for any plan, chart or geometric pattern that represents the cosmos both metaphysically or symbolically. The circular pattern or circle form is ubiquitous in the Arts and Architecture of antiquity.

The English word for mandala could meaning something like Rose Window or Wheel of Life. If you happen to practice Hinduism or live in the mountains of Tibet you would know the word mandala. For most of us in the West the word can  be lountered in many ways however most commonly through Art School, Architecture Studies, the Decorative Arts, Tibetan Buddhism or through study of Psychology and the work of Carl Jung and now in Art Therapy and Holistic thought too.

Its understandable the mandala is becoming more common in the West because of its intricate and aesthetically pleasing and contemplative patterning. It describes the makers anthropo-cosmic universe and mandala tends to be governed by the two major forms of geometry, plane and projective, with circles, squares, and triangles creating various combinations and tesselations. The inherent simplicity within an apparent complex pattern makes the process of making mandala accessible. Find the patterns that are 'universal' across world traditions both ancient and modern and see pattern and structure in the created universe as evidence for intelligence.

Tibetan Monks make a sand mandala and a Persian craftsman finishes a doorway to a mosque entrance in Morocco.

Language and Etymology (the root meaning of words) are important in understanding the nature of the words we use to describe things. It is interesting to explore the Sanskrit meaning of mandala and you will find that both 'manda' मण्ड and 'la' ल aslo have meanings so 'manda' can be translated as; the top of something, the cream of the milk, an elixir or tonic and 'la' is a finite verb and is used in front of words like 'lamate' which means an emotion to delight in something or suggest a direction or way. The word 'dala' means: petal, portion or a kind of honey produced from petals. The word 'man' means to think and mandala is used to describe the path of a planet. 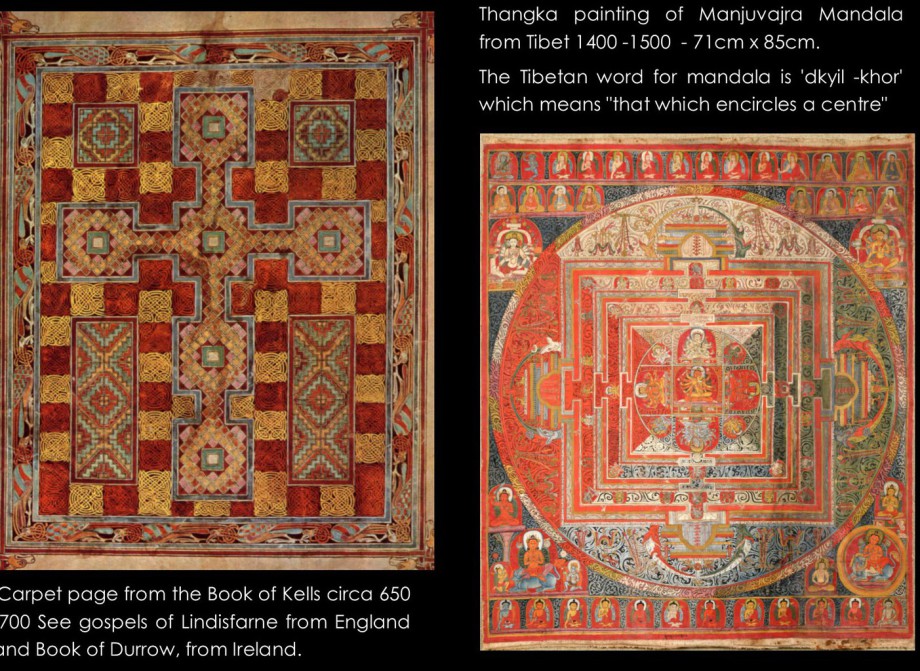 The universal patterns can be found across many diverse cultures.

A Navajo man creates a Medcine Wheel with sand. This is mandala made with coloured sands, ochre, charcoal and chalk. The circle is quartered to represent four cardinal directions. In Mysore a lady creates a ritual mandala pattern ouside her home. This kind art is known as Rangoli or Kolam and designed specifically to attract positive energy during festival of Diwali.

Universal patterns can be found across many cultures.